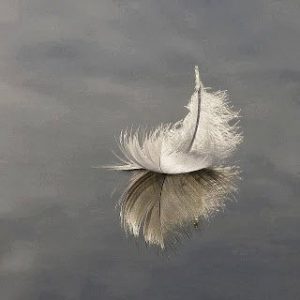 My late husband Glenn sent me a sign that we live on after death while he was still alive.

Two days before his physical death Glenn was in the hospital in a deep coma. He had suffered a massive brain hemorrhage with no signs of recovery. He had undergone an MRI the night before. The doctors would give me the results the following morning when they made their daily rounds. Early the next morning I went downstairs to the hospital cafeteria to get something to eat before the doctors did their rounds. I had barely eaten in days. I was afraid to leave Glenn’s side, so I only left when I had to.

When I returned to Glenn’s bedside, I noticed a small package on the side table next to him but didn’t think anything of it because within minutes the doctors entered the room.

They gave me more bad news. The hemorrhage had caused 80-90% damage in his brain stem. “The brain stem controls your primal bodily functions, like breathing.” There was no coming back from this, I was told. It was the end of the line.

Once I was alone with Glenn, I held his limp hand and talked to him. I told him that it was the end of the road. “You have brain damage and there is no coming back from this. Thank you for telling me over the years that you would never want to live this way, so I know what to. Your sisters will be here tomorrow to say goodbye. I am so sorry. This should be me, not you. I will love you until the end of time.”

I could barely get the words out. I was numb. Then I looked again at the package that was next to him that wasn’t there before, so I opened it. To my shock it was a fresh box of cookies from the local bakery back in NY where Glenn grew up. Not only was it from the exact bakery that Glenn used to tell me about from his childhood, it was his favorite kind, chocolate dipped, chocolate chip cookies. This was Los Angeles and there was no such bakery in LA, nor did they sell them on the internet.

I couldn’t move. I was frozen. I tried to speak, and nothing came out. When I finally could I asked the nurse about the cookies. She had no idea where they came from. “I have been here the whole time,” she said. “No one came in the room, no one. They were not there before. You must have bought them at the cafeteria and forgot.” Then I showed her the cookies and she admitted that the cafeteria didn’t sell anything like that.

With tears in my eyes I looked at my dear sweet husband. He looked so peaceful and knew that this was the “sign” he had told me about.

This was only the beginning of the signs and connections I would get from Glenn. They continue to this day.

I’ve since learned that many get these signs. Many connect with their loved ones after they are gone. I will share what I’ve learned with all of you.